Switched at Birth Wiki
Register
Don't have an account?
Sign In
Advertisement
in: Characters, Male, Adults,
and 5 more

This Is Not a Pipe

Senator John Kennish is the former third-baseman for the Kansas City Royals. Since his retirement from pro athletics however, John has run a chain of Kennish Carwashes. He is lovingly married to his wife Kathryn for at least more than twenty years. He is also the legal father to Bay Kennish and biological father of Daphne Vasquez who inherited his athleticism. John was the one who pointed out the impossibility of Bay's bloodtype which set the life-changing realization that his daughter was switched at birth with another girl into motion. He has done his best to be accepting of the situation, often being the voice of reason in disagreements between Kathryn and Regina. Despite their getting off on the wrong foot, John seems to have a budding friendship with Melody Bledsoe the mother of his daughter's best friend, and spent much of the Buckner Hall scholarship fundraiser telling her stories of his past sports triumphs. He has trouble trusting Regina since the secret came out that she knew about the switch and verbally attacks her often before and after she is kicked out of the guesthouse. If Bay had not insisted otherwise John would not have allowed Regina to attend her daughters' birthday party. Later it is revealed that he took a DNA test, without Bay's permission and before the Kennish family (without Toby) went to get tested, to find out why Bay's school blood test said that she had an impossible blood type.

In The Shock of Being Seen- John receives a phone call regarding Bay and the fact that she's now on academic probation. She doesn't care about her homework because she's heading to art school after high school, a plan neither parent seems to approve of much. They also don't approve of her biological father Angelo, offering to help her with her French homework.

In He Did What He Wanted- John argues with Regina and yells at her about the fact that she hid Daphne's existence from him and Kathryn for years. He says that had he found out, he would have taken both girls. At the end of the episode, John is grabbing a beer from the fridge when he falls to the floor. Regina comes in and finds him, calls 911, and does CPR.

In Ecce Mono- John dreams up an alternate reality where he and Kathryn gained custody of Daphne at 3 years old and raised both girls. They gave Daphne a coclear implant, and because of this, she had a completely different childhood than she would have with Regina. Bay is the outcast of the family and works hard in school to counteract the Puerto Rican stereotypes against her. John and Kathryn have an unstable marriage, and she is cheating on him with Senator Chip Coto. John is the Senate Majority Leader. Bay and Daphne team up to find Regina, who the Kennishs had a restraining order against, denying her access to the girls. They discover that she died. In the end of the episode, John again has the heart attack, and Regina is not there to save him. He wakes up in the hospital with Kathryn and Regina on either side of him, and tells Regina that he is glad she is there.

John is extremely driven, and tries to instill that quality in all three of his children to the point where they often push him away. It is stated by several including Melody Bledsoe and Regina Vasquez that the Kennish family does not understand the value of things, because of John's affluence. John has light dark brown hair and dark brown eyes.

He seems to be rather competitive and athletic, and had always pushed his children to attend sporting events. He is shown to be forgiving towards his wife and family when it was revealed that he had a DNA test done, without Bay's consent, to figure out if he was Bay biological dad and when it is revealed other wise, thinking that his wife cheated on him, he forgave her immediately. His reason being that she was his wife and even if Bay wasn't his child, he raised her and she was his child. Sometimes he is arrogant jerk and thinking he knows what's best.  He is very over-bearing and unreasonable parent to all three kids. 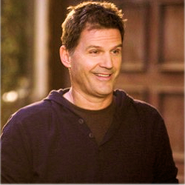 NOTE: D.W. Moffett confirmed that he will appear in all episodes of the final season.[1]