Switched at Birth Wiki
Register
Don't have an account?
Sign In
Advertisement
in: Characters, Vasquez Family, Female,
and 5 more

Half Puerto Rican, Half Other

This Is Not a Pipe

Regina Vasquez is the widow of Angelo Sorrento, the mother of Bay Kennish and Daphne Vasquez, and the former stepmother of Abby Sorrento.

Regina Lourdes Vasquez is the biological mother of Bay and the legal mother of Daphne. Regina, an alcoholic, had a child with Angelo Sorrento, who left when he realized that the girl he and Regina were raising was not biologically his, and thought Regina had had an affair. Regina ran a genetics test on Daphne and discovered that she was not Regina's biological daughter. Regina kept quiet but hired a private investigator to find Bay, her biological daughter. When Daphne went deaf, Regina moved in with her mother, stopped drinking alcohol, and straightened up. She started doing a hairdressing business from her home in East Riverside. 13 years later, Regina received a call saying that the Kennishes had taken home Regina's biological daughter.

The two families met and while Regina held a grudge about the Kennishes being so wealthy, John and Kathryn Kennish silently made plans to get Daphne back. Regina meets Bay they both look alike both have long dark hair and dark eyes. The day that the Kennish family and Vasquez meet, Bay is arrested, and Regina, Kathryn, and John come to the police station, where Bay shows all three her nose piercing. Kathryn is extremely upset and becomes even angrier when Regina defends Bay about getting a piercing, but says that her punishment about buying alcohol should be stricter. Kathryn tells Regina that she knows about her two DUIs from thirteen years ago and plans to get Daphne back. Bay runs off while John tries to calm his wife down. In the middle of the night, Bay comes to the Vasquez's house and talks to Daphne, who takes her to the living room where Regina finds them both. Bay asks Regina how are they are going to develop a mother-daughter relationship if she plans to move out of Kansas City due to debt, which is what Daphne told her. Regina responds with, 'I don't know," and then does Bay's hair. In the morning, Bay returns to the Kennish house and asks Kathryn if Regina and Daphne can move into their guest house. Kathryn says yes, and while the moving truck comes, Kathryn tells Regina she is free to use anything on the property, including the bar. Regina reveals that she has been sober for ten years, and says that she will respect the Kennishes' privacy and not take anything or come into the house without asking first, but she wants them to extend her the same courtesy. With the help of Kathryn, Regina gets a job at a fancy Mission Hills salon. After working there for quite a bit, and meeting her boyfriend, Patrick, there, Angelo, the father of Daphne/Bay, comes back into her life and tries to have a relationship with Bay and Daphne. Only Bay wants to get to know him, but Daphne calls him a monster and refuses to meet him until she arrives at his apartment and asks him if he left because she went deaf. Angelo tries to date Regina, and she is drawn to him at first, but stops, refuses to be in a romantic relationship with him, and attempts to start a business with him. However, Angelo backs out when he discovers that Regina knew about the switch for quite some time. Then, Angelo is at risk of being deported to Italy. Regina agrees to help him, but the judge says to deport him. At the last moment, when Regina sees Bay so upset, she marries Angelo before he can be deported. Regina and Angelo are under marriage fraud watch.

In The Shock of Being Seen,

In Tree of Forgiveness, Regina helps Simone, who is emotionally distraught after sleeping with Emmett.

In The Declaration of Independence,

In We Are the Kraken of Our Own Sinking Ships, Regina and Patrick have reconnected.

In Street Noises Invade the House,

In The Awakening Conscience, Angelo tells Regina about his unborn child and Regina has a run-in with Lana.

In Duel of Two Women, Regina tells Adriana and Daphne about Angelo and Lana baby. Regina finds out from her new doctor that she can't sign anymore.

In Dressing for the Charade Regina runs into an old friend while out with Kathryn.

In The Acquired Inability to Escape Regina has her first drink of alcohol.

In Human/Need/Desire Regina butts heads with John and Kathryn over how to handle the situation with Daphne's food truck.

In Drive in the Knife Regina is fired from her new job after the first day and turns to alcohol after being sober for many years.

In Tight Rope Walker, Zane tells Regina what Bay told him. Regina confronts Bay about telling Zane about her being an alcoholic and angrily scolds her for it. Bay is severely hurt, but forgives Regina for her outburst after she comes into Bay's bedroom to apologize. The two then decide to keep it a secret and Regina promises to go back to her classes and get help. However, she goes back on her word when she leaves a voicemail for a sponsor and then deletes the message instead of sending it.

In Introducing the Miracle, an intoxicated Regina shows up at Angelo's.

In Mother and Child Divided Regina returns early from rehab. Bay is the only one who is happy to see her. Regina finds that Daphne has grown closer to the Kennish family. Feeling left out Regina goes to stay at Angelo's place. Bay finds out and goes to Angelo's place to talk to Regina about why they don't hang out and bond together. Regina told her the first time she met Bay she was scared to get close to her. Bay ask if she can stay. Regina said yes stay as long as she wanted.

In The Good Samaritan, Regina and Bay's messiness frustrates Angelo.

In He Did What He Wanted, Regina gets a second chance at the job she was fired from.

In The Physical Impossibility of Death in the Mind of Someone Living, living Angelo offers Regina help in bringing in some business.

In The Merrymakers, Regina is sad that Bay is moving out because Regina was so happy to have Bay for the whole summer.

In Departure of Summer, Regina moves back into the Kennish guest house.

In Your Body Is a Battleground,

In It Hurts to Wait With Love if Love is Somewhere Else,

In Have You Really the Courage?,

In Memory is Your Image of Perfection,

In Dance Me to the End of Love,

In Love Among the Ruins,

In And We Bring the Light,

In The Image Disappears,

In Girl With Death Mask (She Plays Alone),

In It Isn't What You Think,

In Girl on the Cliff,

In And Life Begins Right Away,

In And It Cannot Be Changed,

In Bracing The Waves,

In I Lock the Door Upon Myself,

In We Were So Close That Nothing Used to Stand Between Us,

In At First Clear Word,

In Black and Gray,

In Fog and Storm and Rain,

In The Player's Choice,

In There is My Heart,

In To Repel Ghosts,

In Between Hope and Fear,

In We Mourn, We Weep, We Love Again,

In Instead of Damning the Darkness, It's Better to Light a Little Lantern,

In Borrowing Your Enemy's Arrows,

In To the Victor Belong the Spoils,

In The Accommodations of Desire,

In A Mad Tea Party,

In And Always Searching for Beauty,

Regina has long, dark brown wavy hair, round, brown eyes and a large, white smile. Regina is 5'4" tall and has a slim body. She is much like her daughter, Bay; she is sarcastic and hot-headed, at times, with somewhat of a temper. However, she has a comforting side and is very honest with her family and friends. She and Bay share a passion for art. Both are smart and strong-willed. She is very nice and wise. She is a good mother and cares about her two girls Bay and Daphne.

Regina is a recovering alcoholic and has been sober since Daphne got meningitis when she was 3 years old. Despite learning that Daphne was not biologically related to her, she kept Daphne and raised her as her own daughter for thirteen years. Though she had the opportunity when Bay was a young girl, Regina decided not to try to take Bay away. Regina realized that to take Bay from the only family she knew would only hurt Bay, yet she hired a private investigator to "spy" on her. 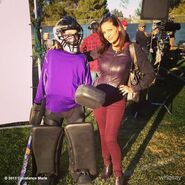 Bay and Regina at the field hockey 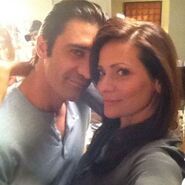 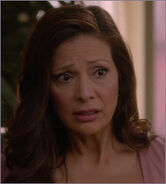 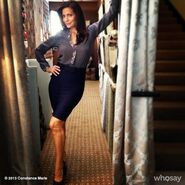 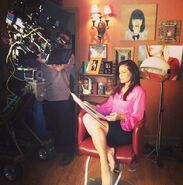 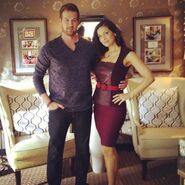 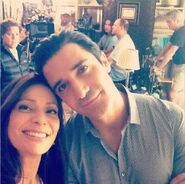 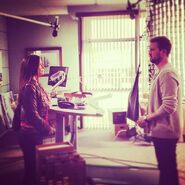 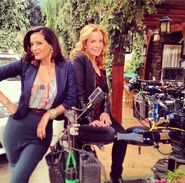 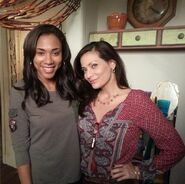