Switched at Birth Wiki
Register
Don't have an account?
Sign In
Advertisement
in: Characters, Deaf Characters, Male,
and 5 more

In a Relationship with Bay Kennish

Travis Barnes is a deaf character who lives with Emmett and Melody Bledsoe for the majority of the show. He is a little older than the other kids who go to Carlton because he had been held back while he was in a hearing school. His actor, Ryan Lane, is actually deaf outside of the show.

In Switched at Birth, Travis is shown to be a janitor, but he and Daphne get into an argument, and she ends up informing the main office. Because of this, Travis is fired from his job. Next day, even though she is the one who got him fired, Daphne helps him get a new job at Kennish Car Wash. Unfortunately, Travis and his new boss, John, get into an argument when one of the car wash customers is being a jerk to him. John calls Daphne to come to his office to interpret for Travis, as the two are having difficulty communicating. After she arrives, her father tells her to explain to Travis that he is fired, after which Travis leaves. Daphne follows him outside and tries to convince him to not quit, but Travis says that he is done working at the car wash.

Later on, Daphne is still determined to get Travis to return to Kennish Car Wash. She goes to visit him at his house where she meets his mother who says, "Oh, you talk!". She lets her in and tells her that Travis is in his bedroom, playing a video game alone. They enter in his room, and instead of using ASL, his mother gestures wildly and yells at him, telling him that his friend is here and that he needs to clean up his room. After his mother leaves, Daphne asks if she knows ASL, but Travis replies, "Only the ones she makes up. 'Come eat'. 'Go to sleep'. 'Clean your room'.". After learning about this, Daphne tells him that while her father is a terrible signer, at least he always tries to do his best; he's a good man and the best dad she has ever had. Her sympathetic words finally convince him to rejoin Kennish Car Wash. Afterward, Travis apologizes to John, and he asks him to give him a second chance, which he agrees to accept.

In Venus, Cupid, Folly, and Time, Daphne invited Travis to come with her as a friend. Wilke surprises Daphne on prom night with a limo and Travis ends up joining them.

In The Declaration Of Independence, Daphne agrees to a date with Travis, but she ended up standing him up to find Jeff back at the restaurant. John who has been suspicious of Travis' home life invites him to the batting cages. Travis felt sad that Daphne stood him up, and it seems like Travis has romantic feelings for Daphne.

In The Door to Freedom, Daphne turns to Travis for support after all that happened with Jeff, and the two plot to start up a food truck business of Daphne's very own.

In Dressing for the Charade, Travis told Daphne his mom is kicking him out when he turns 18. Daphne goes to Travis' mom to find out the truth and finds out the Travis wants to move out.

In Mother and Child Divided, Travis moves in with Emmett and Melody.

In Human/Need/Desire, Travis and Noah get in a fight.

In As The Shadows Deepen, an event for the deaf kids from Carlton occurred in Maui, Kansas which they featured the movie Deafenstein. Travis was a bit depressed and began to play at a booth and which Mary Beth was working at and they seem to get along very well.

In The Merrymakers, Travis has had three dates with Mary Beth and he is waiting for the right moment to kiss her. Travis is at scratch waiting for Toby and Emmett for Toby's Bachelor party but they don't show up and Emmett asks to stall the stripper. Mary Beth is dare to give a cute guy a kiss and she goes to scratch with Bay and sees Travis dancing with a stripper and gets sad and runs away and Travis happen to see her leave. Travis shows up at Maui, Kansas to the booth that Mary Beth works at grabs her hand and places her brother military tags in her hand that she had lost couple of weeks ago. She is just so amazed and grabs Travis shirt and kisses him.

Travis has short straight dark brown hair and green eyes. Travis first appears as the hotheaded Carlton janitor who has gotten in an argument with Daphne. Daphne feels bad that the complaint has gotten him fired and talks John into giving him a job at Kennish Car Wash. Later, when Daphne comes to Travis's house to investigate John's claims that Travis had an explicit altercation with a hearing customer, she learns that none of his family have bothered to learn to sign. Daphne is sympathetic because her own situation with Angelo and they bond.

In the episode "Dressing for the charade" Bay describes Travis as "the deaf Matt Damon".

Travis does not come from money and therefore seems to not wear a variety of clothing.

Travis's father and brother, although mentioned, have never been seen.

When Bay Kennish and Daphne Vasquez went to China, Bay called Travis and asked him to join them over there; he did. They pair were living together in China for almost a year when a call from Melody Bledsoe brought them back to Missouri. Things became complicated when Melody called them from China and told them that Emmett, Bay's ex-boyfriend and Travis's former close friend and foster brother, had attempted suicide by overdosing on his medication. Travis, although sympathetic towards Emmett, was soon told by Melody that Emmett was jealous and that Emmett felt as if Travis had stolen his life as Melody's other son and as Bay's new boyfriend.

Things cool down for a period until Travis sees that Bay has given Emmett a tattoo. Since he was not told of this, he is deeply hurt by the apparent intimacy between them. After a rough period, they agree that they should have been more open with him about it. Travis then tells Bay that if she wants to be friends with Emmett, he won't stop her, and that he was being selfish. They later make up, although suffer a set-back when Travis asks her if he is better in bed than Emmett.

Things come to a head in The Wolf is Waiting when Travis's biological mother invites Bay and Travis over for dinner. We are then introduced to his maternal uncle, Eddie, which makes Travis noticeably uncomfortable, much to Bay's surprise. Travis reminds Bay of an earlier conversation between them, after Bay's rape by Tank, that Travis himself had been molested by "a close family friend". Travis later reveals that he lied and that the "close family friend" was actually his uncle, Eddie, who he was very close to as a young boy. Bay tells him that they need to leave, but Travis says it doesn't matter, and they stay for dinner, although they leave before dessert. Bay tells Travis she will spend the night with him that night, but Travis declines, saying he wants to be alone. Bay hears Travis smashing a lamp in his dorm room, but later returns to her apartment, not wanting to bother him. The following day, Travis's mother comes to see Bay at work and tells her that she suspects something is wrong, but Bay refuses to tell her anything, as it is not her place to tell. She begs Travis to go over to his mother's house again, telling him that she will translate and help him with telling his mother everything. Travis finally agrees, and they go over to his childhood home, where he and Bay brokenly tell his mother about what happened. His mother breaks down, telling him that she doesn't believe him and that she doesn't want to hear it, and that she's been trying to learn his language, but Travis says he's not twelve years old anymore, and that he doesn't need it. Bay, at Mrs. Barnes insistence that she help her, tells Mrs. Barnes that she needs to tell Travis that she believes him. Mrs. Barnes finally tells him that she believes him, and the two reconcile. At the end of the episode, Travis tells Bay that as long as he has her (he had been banned from playing baseball at UMKC) he doesn't need anything else. However, when John Kennish, Bay's father and Travis's mentor, calls him over to the house to tell him about an opportunity he can't refuse (the chance to play pro baseball in Tokyo), he feels that he cannot pass it up.

In Long Live Love, Bay hears from her father about Travis's opportunity to play baseball in Tokyo before Travis can tell her himself. She is understandably devastated, but is shocked when Travis tells her that he wants her to go with him. He tells her that he looked up and did some research about Japanese art online and Bay says that maybe she could do tattoo work out in Tokyo. Travis then explains that it is a traveling baseball league, so she would have to continue to travel with him. Bay asks Travis what she's supposed to do about work, and doesn't know if she can go, knowing that she would only be able to sight-see and study each method of artwork very briefly. Finally, Bay goes to see Emmett, and asks him to go to Tokyo in her stead and to help Travis along the way. Bay then tells Travis about Emmett's decision to go, too, and Travis asks her if it'll be the three of them together. Bay confesses that she needs to stay behind to make a name for herself, because she has dreams, too. She then tells Travis that they are strong enough to survive the distance, and that she will spend Thanksgiving with him in Tokyo, and will be adding fourteen hours whenever she looks at her phone, and wondering when she will be able to call him again. 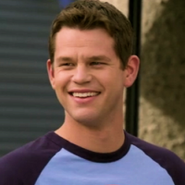 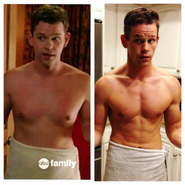 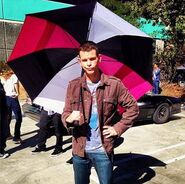